We are announcing some exciting new features in the upcoming version of Timeline 3D for iOS 7.

We also improved the features that you are using already.

Most importantly, we improved the way that your timelines look and the feeling of depth in a 3D presentation. These improvements will make your timeline more beautiful and easy to read, both on your device screen as well as when connected to an external display.

“Depth” is a key concept that Apple has been pushing for iOS 7. There are two main features I've added which will increase the feeling of depth for your timeline presentations.

Since releasing the original version of Timeline 3D for Mac five years ago, I have made dozens of subtle changes to the way 3D timelines are displayed. Nearly every update has contained updates to the 3D display. These were improvements to positioning, movement, lighting, shadows, coloring, lighting, and performance.

Each one of these changes may have been hard to detect on it's own. In fact, I have tried to tune each of them down to be just at the edge of perception. Did you notice any? When the changes are considered as a whole, however, the improvements are obvious.

Consider the comparison image below. The top version is Timeline 3D v2 for Mac OS X, the version that was recognized at the Apple Design Awards in 2008. The bottom version was generated on an iPhone with the upcoming version of Timeline 3D for iOS. Click on the image to view it at full size. 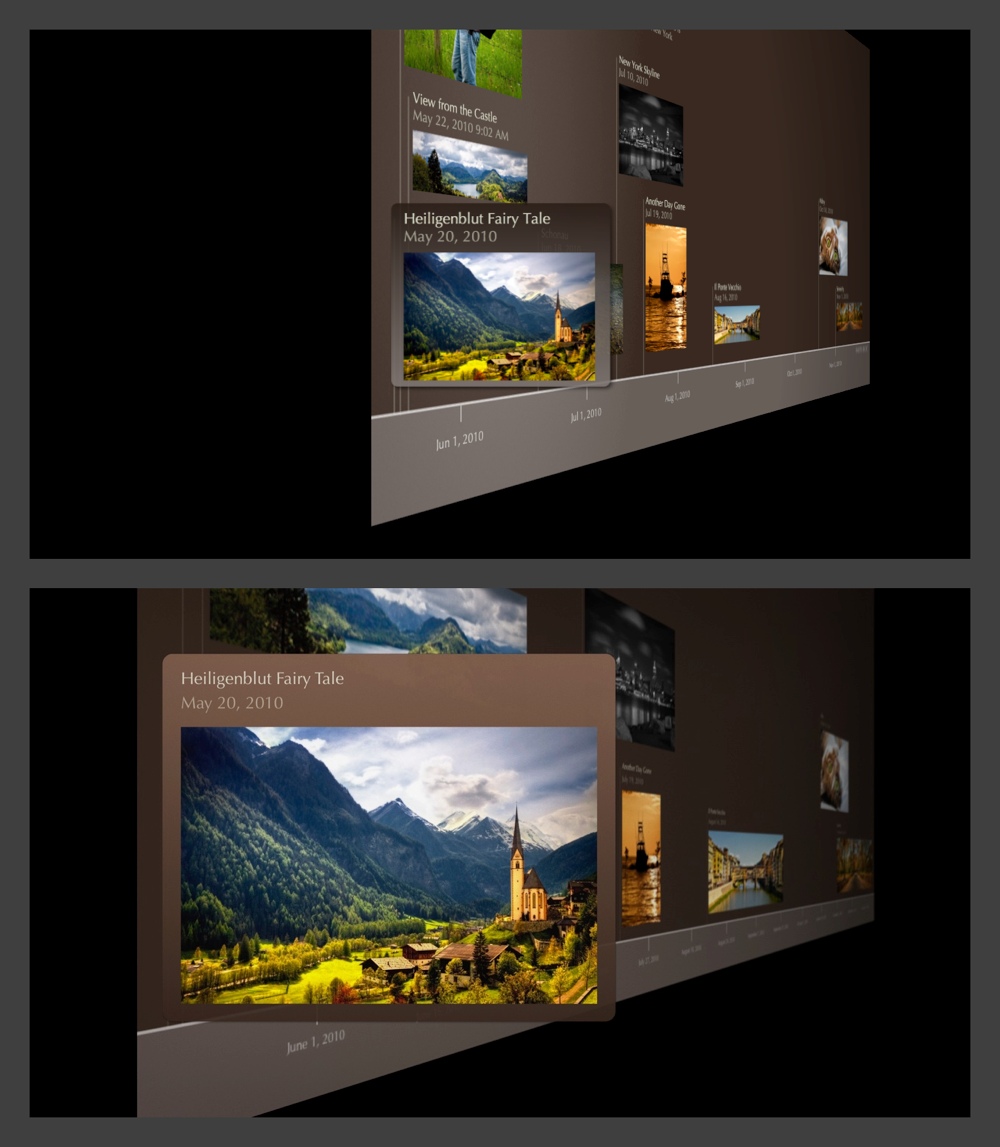 This looks outstanding, Adam. Any plans for these new iOS features to sneak into an updated Mac version?!

About one year ago, I began working on major releases of Timeline 3D for both Mac and iOS. Part of the goal of those releases was to bring parity to the document formats, features, and code for the two products.

However, the announcement of iOS 7 changed my plans on that. I saw how much work it would be to properly adapt the app for iOS 7 so I decided to focus my work on that.

We do hope to ship a major release of the Mac version in the future. The project is well underway. The new features (such as the lighting code) are often being simultaneously developed for both platform.

However, we don't have a schedule for this release yet. We are working overtime on getting the big iOS launch ready. After we see how that goes, we'll evaluate the product, the market, our goals, and make future plans.

Adam - any chance that by clicking on the 3D frame in front view it can enlarge to fill the screen. As a work around In the Mac 3D version - i render the output to Keynote and then place the 3D timeline animation just before the slide I used to input into the Timeline 3D software. The results are great looking as I step thru my Key Note presentation - but would sure be great to be able accomplish the same effect inside Timeline 3D (would save a tremendous amount of work by eliminating the KeyNote workaround). Thanks for making such great products!

Robert - Thank you for the kind words about Timeline 3D! If I understand you correctly, you should be able to accomplish what you want to do in 3D view by pressing the return key. In 3D view, the return key toggles zoom levels to size the timeline to fill the screen either vertically or horizontally. The only caveat is that this functionality does not work for very long timelines, since the software determines that fitting the entire timeline on the screen in that case would make it unreadable.