Timeline 3D v5.2 was released today on the Mac App Store (both in-app and education version).

I rewrote all of the rendering code to use Metal/Swift migrating from OpenGL/C++ which should keep it compatible with Apple platforms as they evolve. For example, it renders with the new M1 chip that was just announced.

I also updated the user interface to the new Big Sur patterns including dark mode, which looks pretty cool. Kenichi Yoshida, who has been contributing beautiful illustrations to Timeline 3D for over a decade, has updated the icon to match the new Big Sur style.

I hope you enjoy the update. Thanks for your continued support. Some of you have been with me on this journey for over 15 years! If you are feeling generous, please consider leaving a positive review on the app store. Cheers!

I have been testing Timeline 3D with Big Sur as well as iOS 14 (both are currently in beta). The bad news is that it looks like Bug Sur has changed the OpenGL pipeline such that it breaks the 3D rendering features. Apple has asked developers to move from OpenGL to Metal so it is unlikely that Apple will prioritize a fix.

The good news is that I am working on a free upgrade to Timeline 3D v5. I am rewriting our custom rendering pipeline with Metal for better graphics and battery life. I am also modernizing the user interface to support Dark Mode and other Big Sur features.

Furthermore, I have obtained a Mac Transition Kit featuring the new Apple Silicon so I will be working to make sure that Timeline 3D will be compatible with the new hardware when it becomes available.

Software development is difficult to predict, but I already have the basic features ported to Metal and am aiming to have the update ready in September. If you depend on Timeline 3D for macOS, please avoid updating to Big Sur until that update is available. iOS 14 seems to run Timeline 3D just fine so far though it is also being upgraded.

I released the first version of my Timeline software 15 years ago! That is a long time for an indie sofware application, and I am proud that some of my customers from that first year and still actively using the software today. I'm looking forward to upgrading Timeline 3D for the next generation of Apple operating systems and hardware.

Thank to you all the beta testers who have been sending us bug reports and feedback over the past month. We have just released the new version of Timeline 3D for iOS to the App Store. New features include:

There are now two versions of Timeline 3D for iOS on the App Store:

Both versions have the same price and functionality when all the features are unlocked.
All customers who previously purchased Timeline 3D for iOS will be automatically upgraded to the “Education Edition” so that all features will continue to work (including the new features) without any additional purchase required.

New customers are encouraged to try the free version of Timeline 3D for iOS. It allows you to create, edit, save, and present timelines at no cost. If you choose to export a rendered timeline chart (print, PDF, movie, slideshow, etc…) then you can add that functionality with an in-app purchase. If you are a long-time customer of the Mac version of our software, there has never been a better time to try out the iOS version too!

Howdy folks! I am pleased to announce a new version of Timeline 3D for iOS that is several years in the making. It will have some great new user features including:

In addition to these great features, this update also represents a major re-architecture of the code to bring the iOS and macOS versions of Timeline 3D into a common code base. That means that it will be easier for me to keep them both up-to-day with the latest Apple technologies as well as making simultaneous improvements across platforms.

Because this new update has so many changes, some of which change the format of user data, I am planning to beta test it a few weeks on TestFlight before releasing. If you'd like to join the beta test, please send us an email at support@beedocs.com.

I am pleased to announce the release and immediate availability of Timeline 3D for Mac (v5), a significant update to our award-winning timeline software for Mac OS X. Completely redesigned for OS X Yosemite, Timeline 3D provides a new interface to support the creation of larger and more complex timelines. Timeline 3D helps present chronologies and historical events in full screen and with a 3D perspective. 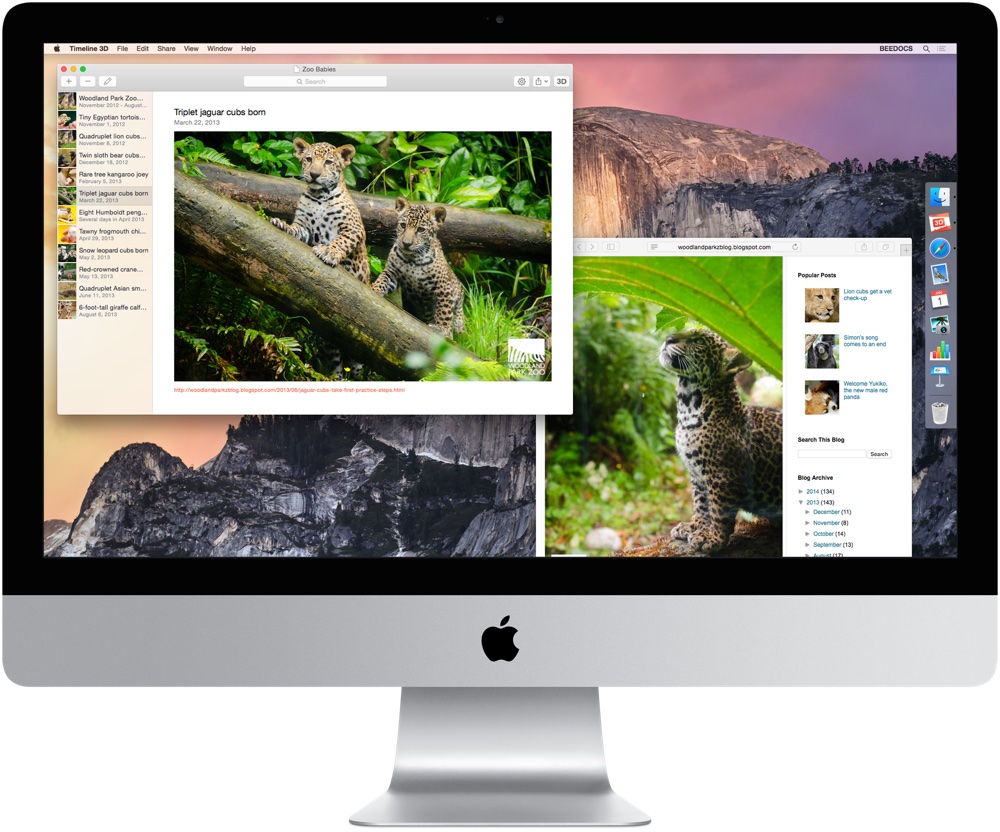 We also launched our new website and updated help documentation to support the new version.

I encourage you to send feedback to me at support@beedocs.com. I look forward to hearing what you think of the new version. Cheers!

This weekend, I released the second beta for the new Timeline 3D for OS Yosemite. Please replace the previous beta and give it a spin. I appreciate your feedback at support@beedocs.com!