If you have been unable to export your timelines, we have a new release for you that should fix the problem!

There is an incompatibility bug between Mac OS X 10.6.3 and computers with the Intel GMA 950 graphics card. This affects MacBooks that were sold a few years ago as well as certain MacMini machines. The bug causes applications such as Bee Docs Timeline 3D to crash when they use a 3D anti-aliasing technique called mipmapping.

In the version of Bee Docs Timeline 3D that I just posted, we detect whether you are using the buggy combination of GPU and OS and automatically disable the mipmapping to avoid the crash. You may notice a bit of shimmering or jagged text in the 3D mode, but it is a subtle difference. The majority of our customers remain unaffected.

If you have had problems with the 3D mode or exports, please use the "Check for Updates" feature in Bee Docs Timeline to upgrade to 2.11.4.

I just posted an update that fixes the freezing issue that some of you were experiencing during movie exports. It was a hard one to fix because it couldn't be reproduced on any of the four Macs that I normally use. Fortunately, the MacBook that Elise uses exhibited the problem so I was able to borrow her machine for a few days to track the bug down.

Use the "Check for Updates" feature in Bee Docs Timeline to upgrade.

The major issue still outstanding is the incompatibility between Mac OS X 10.6.3 and Macs with the Intel GMA 950 card. Though we will have to wait for Apple to fix the underlying problem, Gary and I are working on an update that will work around the issue with a slight loss of image quality on those particular computers. Stay tuned, I expect to have that update shipping by next week.

Tony Hoffman, from Alabama, sent us this beautiful timeline his family put together for Mother's Day. 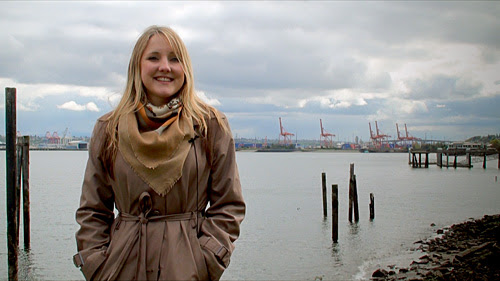 Last August, we published the BEEDOCS 101 movie which provided an overview of how to create and edit a basic timeline. We have received a lot of positive feedback about that, so everyone should check it out if you haven't yet.

This week, we are proud to release the follow up video. BEEDOCS 102 : Sharing Timelines gives a quick overview of the various export and sharing options in Bee Docs Timeline 3D. It covers a lot of information in 3 minutes, so if you see something you would like more detail on, let us know.

We continue to try to raise the bar on our production quality, so we hope you enjoy that aspect too. Special thanks to Morusque for giving us permission to use his music. This is the first time that we've recorded the narration in a recording studio. Thanks to Geoff Ott and London Bridge Studio for help with that. Thanks to my sister, Ashley Marcu of Cherry Hill Design, who allowed us to use images from her greeting card blog in the example timeline. Props to Costco Photo Center as well for the nice timeline poster that only cost $3.

Last month, I wrote a post about a new bug in Mac OS X 10.6.3 that is preventing some people from exporting their timelines. I wanted to publish some more technical information for the customers who would like some more detail as well as other developers who may be also experiencing this behavior.

In Mac OS X 10.6.3, there are certain Quartz Composer documents (compositions) that crash the host application when run on a machine with the Intel GMA 950 graphics card (GPU). For example, when Finder tries to create a QuickLook preview of these compositions, Finder will crash and reboot.

The combination to create that crash is as follows:

I'm not sure if this bug is confined to Quartz Composer documents or if it also affects applications that are accessing the OpenGL framework directly. If anyone knows, please leave a comment.

In Bee Docs Timeline 3D, the full screen presentation mode is actually a separate application from the application that allows you to create and edit timelines. If your computer is affected by this graphics bug, pressing the "3D" button will fade out your screen, launch the presentation application (which will crash immediately), and then the screen will then return to the main program. The bug also prevents 3D exports.

I have created two very simple Quartz Composer documents that demonstrate the problem. One of them blends two images and then displays the result with a mipmap. The other example crops one image and displays it, then displays a second image with a mipmap. If you would like, you can download the examples here. 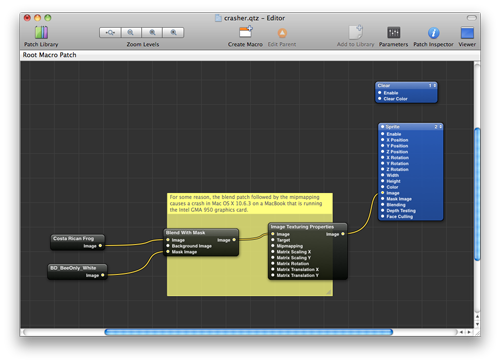 If you are a customer experiencing this problem, you are welcome to transfer your license to a machine with a different type of graphics card, downgrade your Mac to 10.6.1 (10.6.2 had a different graphics bug), or wait until there is a fix from Apple. Sorry for the inconvenience.