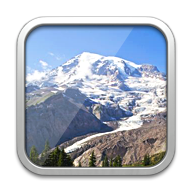 Thanks to those of you who left a comment on my Guess the New Feature blog post with the mountain icon last week. There were some very creative guesses!

The new feature enabled by this button is one that many of our education customers have requested. We call it Geological Time Scales.

The current version of Timeline has a potential date range of 1,400,000 BC to 2,100,100 AD in one second increments. This is enough flexibility for most of you, but some customers want to chart longer time spans for the history of universe, dinosaurs, the collapse of our solar system, etc… 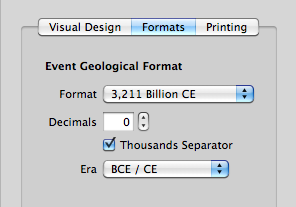 I am looking forward to seeing what new timelines that customers create with Geological Time Scales!

This looks great. Is there a way of setting up a simple counting timeline? I use the software to chart film scenes and acts (usually 1-120 or so) and right now, I have to hide the dates because they don't make sense for me.

So, the universe is 13.7billion years old but most of the action happens within the first few minutes. Is there any prospect of a logarithmic scale so that we could represent cosmological events on a timeline?

Chip, thank you for your feedback. We do not have plans for logarithmic scales at this time, though I appreciate its potential usefulness for scientific applications in particular.

Yes. I could do neat things with that ability, both in classes and in my public talks...maybe even in professional talks and in stand-alone kiosks that sometimes scientists make.

With so little event-detail available for periods prior to about 2000 BCE there's really not much use for a linear scale, so this is really necessary in order to make use of your expanded dates. Even, say fossil estimated point-back origins would be un-usable in a linear scale if you're talking millennia between them.

BUT...imagine what this could mean for teachers and what a splash it would make.

I too need some non-linear x-axis options. If I put a date from 11,000 B.C. on the chart, but most of my dates are 1400 A.D. forward, all the latter dates are scrunched up at the end of the chart. There should be able to turn off the x-axis linear uniformity, so that events are evenly spread out. I think this is a HUGE limitation of Timeline 3D.

Is there any way to import a Geologic Time Scale? Paleontologists often use other programs to catalog their specimens and this app would be great for visualizing their data if it could be imported. - Rod