The beta will be free while I iron out the bugs and put the finishing touches on the iOS 8 product that goes with it. This is a good time to send me feedback about any bugs you find.

The new version is an almost complete rewrite of the code base (the last rewrite of this scale was the “T2” release back in 2007). I have been working on this release for about three years. Some of the features have found their way into the iOS releases during that time.

A few people asked for more details on why a rewrite was necessary. The main reason is that the iOS version and the Mac version of Timeline 3D shared about 5% of their code base and the other 95% was different for each platform. This is because the Mac version was written before iOS existed and many of it’s technologies are not available on iOS. It is difficult for me to develop new features and fix bugs when the products are completely different behind the scenes.

The new versions have about 85% of the code in common. All of the date parsing, document storage, layout, rendering, and exporting code is now common. For example, when I recently improved the way date parsing works in Chinese, that improvement was applied to both platforms.

In this effort, and also in the effort to remove my dependence on technologies that have been deprecated or fallen out of favor, I swapped out many of the core technologies for newer technologies.

Here are some of the frameworks that were major components of Timeline 3D and have now been removed:

In their place, I have added modern Apple technologies such as:

Obviously, the user interface has changed quite a bit too. I’ve discussed some of those changes on this blog. The main idea behind the changes is to address the most common issues customers have as well and standardizing on a user interface that can scale from phones to 5k iMacs.

If you have any questions or concerns about the new version, please send me an e-mail. I realize that it will be a transition and will cause some inconvenience, but I hope that the new architecture will serve us all well for the next 5-10 years.

When I announced the new versions of Timeline 3D, I received a lot of feedback about pricing. Thank you to everyone who sent a thoughtful reply. I enjoyed interacting with you and if helped refine my thinking.

My goals remain the same:

So, here is my latest plan…

Unlocking the exporting and rendering features require a purchase. The purchases will be handled as an in-app purchase. These are non-consumable purchases which means that unlocking a feature on one of my Macs will allow you to unlock the feature on all your Macs that are using the same Apple ID or family sharing.

Here is the pricing sheet for the Timeline 3D for OS X Yosemite launch. The prices are subject to change in the future. 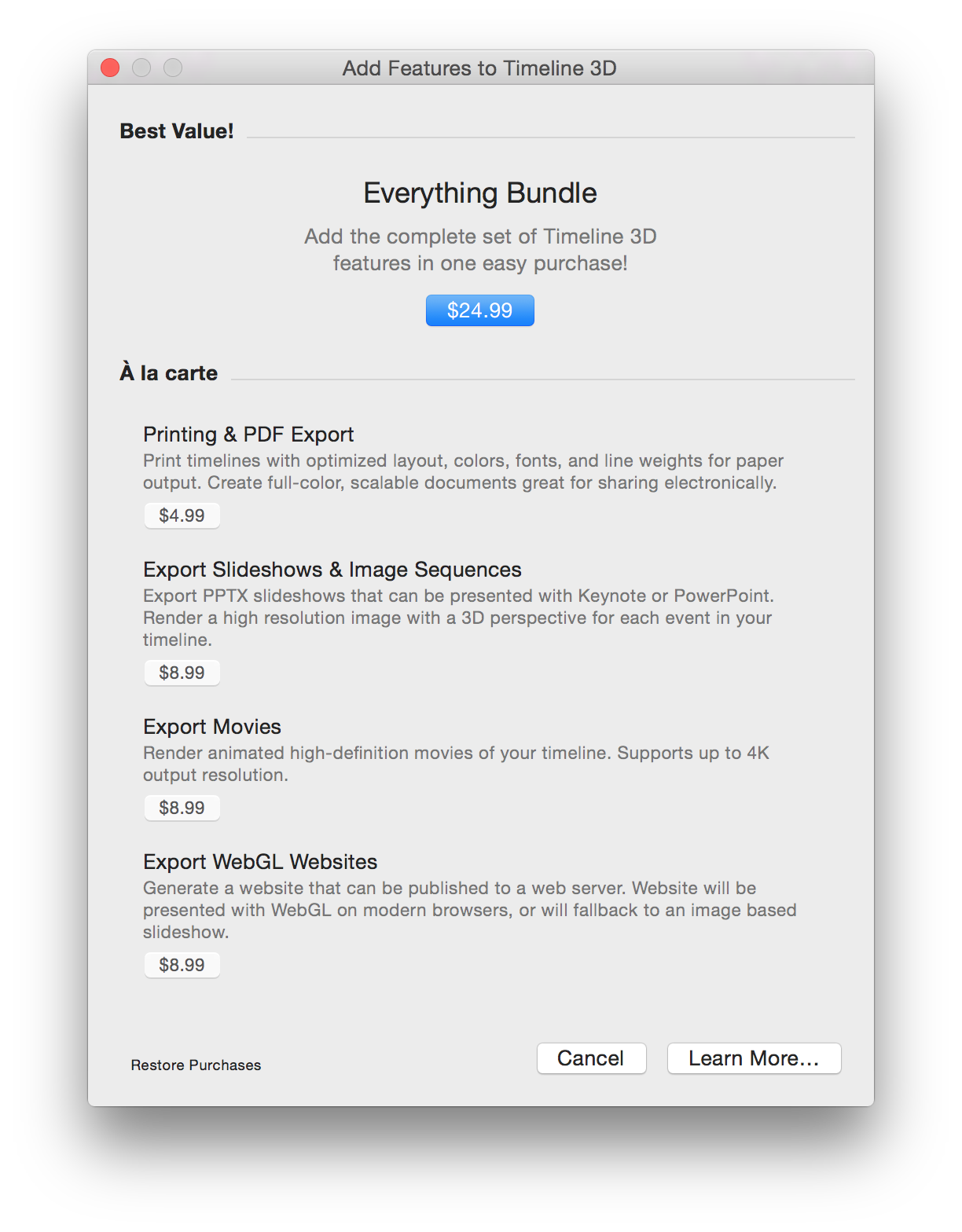 I know that education and enterprise customers are interested in a paid up-front version so that they can purchase and install Timeline 3D in bulk. I am working on a solution to that as well.

Hopefully the new pricing arrangement seems clear and fair. If you have questions or feedback, please send me an e-mail at support@beedocs.com.

Here is a comparison between the legacy Timeline 3D (v3) interface for editing timeline events and the new design that will be released soon for the Yosemite update. The new design gives much more space to your content and makes it easier to see and edit multiple events at the same time.

Note the new “Color Category” feature. This allows you to quickly categorize your events with a single click. The actual colors change with the theme so you can adapt your timeline to different outputs (like printing) and still retain the category information.