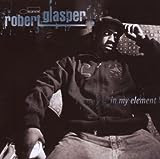 This week I treated myself to my first new music album in a while, Robert Glasper's In My Element. I first heard Robert Glasper on NPR a few days ago and it really caught my ear.

I've often been interested in combining jazz music with funk / hip-hop music but it is an elusive combo. Good jazz is often sophisticated and complex and good funk and hip-hop are often honest, raw, earthy, and physical. Unfortunately, many musicians combine them and loose the sophistication as well as the honesty and physicality. What they end up with something, well... smooth.

What struck me about Robert Glasper is that he seemed to be combining genres without loosing the good qualities in each. This album is definitely a jazz trio record, but it is fun to hear hip-hop and other styles mixing with the jazz. Unlike other artists, he isn't bringing in turntables and samplers, but rather tipping his hat to other genres using the jazz trio format.

In the NPR interview, Glasper said that he didn't want to talk about his influences, but rather wanted to have a "Glasper" style in the same way that there is a "Monk" style or "McCoy" style.

Of course, having Glasper fail to point out his influences makes me listen for them even more. I don't know about you, but when I listed to this record I hear a similarity to Gonzalo Rubalcaba, especially the way the trio interacts. There is definitely a Keith Jarrett influence on the piano playing. And, does anyone else hear a connection to Vince Guaraldi?

Anyway, check it out. I think a lot of different people will appreciate this album, regardless of what you normally listed to. I'd like to know what you think and what influences / connections you hear in the music.