Getting Close to the Audience

I was watching one of my U2 concert DVDs this past week and was struck by the efforts that Bono makes to be close to his audience. It got me thinking about business... 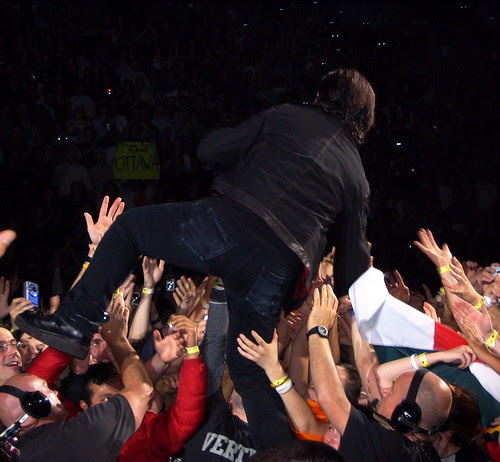 Bono, who is one of my heros, has often found ways to reach out and touch his audience. In 1985 at Live Aid, he jumped into the crowd so thick that the band was unable to finish it's set. During the Joshua Tree tour he used a hand held spot light to extend his reach to all areas of the arena. In the 90's U2 popularized the "B-Stage" which allows the band to be out in the middle of the audience. On the Popmart tour, the band walked through the crowd with a camera crew on their way to the stage at the beginning of the show. On the Elevation tour, they started the concert with all the house lights on. In recent tours they have had catwalks which allow the band to walk through the area within reach of fans.

Of course there is always the good old fashion kind of reaching out and touching someone too. Bono often invites audience members on stage, jumps into the crowd, or sprays the crowd with champagne. The band also makes an effort to sign autographs for people before almost every show.

It seems to me that companies, particularly technology companies, could learn something from Bono. I can think of a few good examples of companies that tried to make a personal connection to me... For instance, my ISP sent me chocolates in a hand addressed box this Christmas (they also have a real person that answers the phone when you call). Amazon, in the good old days, used to send little treats like mouse pads to thank me for being a customer, and the e-mails Amazon would send would be signed by Jeff Bezos with his e-mail as the return address (probably screened though).

However, the bad examples far outweigh the good. Isn't it ironic how hard it is to get a real person on the phone when you try to get service from a phone company? Have you ever tried to find a contact phone number on Amazon's web site? Many tech companies seem like they are trying to hide from their audience instead of trying to get close to them.

So, I'm thinking, how can I get closer to my own audience? Blogging is a start. I've also begun to Google my customers' names and companies as orders come in to see who they are and subscribe to their blogs if I find them. There are a few authors who are customers, so I have bought and read some of their books. I've also been handwriting thank you notes to new customers. I've launched an invite only customer design panel where I discuss new design ideas. And, of course, I try to answer my support e-mails and phone calls as fast as I can.

I had rock stars in the back of my head as I was designing the Help menu for T2 last week. I took a look at the Help menu of many of my favorite applications. Most of them just have documentation that you can search through on your own. A few have links to User Forums in the Help menu. One of them (can't remember which one) had a menu item for "E-mail Support."

I was thinking that it would be cool to have a menu item in the Help menu that is "iChat Support" that shows a little green dot next to it when someone is available for real-time support via text, audio, or video chat. I'm not sure how this will scale. After all, there is only one of me for now... But, what would Bono do? Throw himself into the crowd probably. Just a thought...

Many thanks to Flickr user iChris for permission to use his great photo.

Here is a photo from my neighborhood park yesterday. I took a "snow day" and stayed home from the office. It was nice to hang out with my family and get caught up on thank you notes.

Today the roads were clear enough to get into the office. Back to work on T2!

Over the past several months, in addition to my design work on T2, I have build many small test applications that implement different aspects of the T2 project. They give me a chance to work out some of the challenges without diving full on into a large code base.

In the past week, I have shifted much more of my attention from design to implementation. Much of that effort has been on small test application, but I have recently started to assemble the various technologies into a "T2" project as well.

Here some of the things I have been working on:

There are at least a few months of work to go before a beta release, but it is fun to finally dive in.